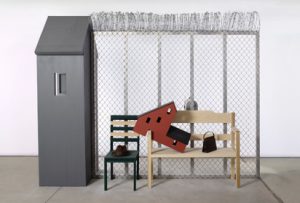 The last few years have been a time of reflection on past and present glories for Iranian modern artists. In 2018, New York’s MoMA PS1 staged a posthumous retrospective for director and playwright Reza Abdoh, and London’s Mosaic Rooms surveyed the career of abstract painter Behjat Sadr. In Minneapolis, the Walker Art Center cast the spotlight on septuagenarian artist and architect Siah Armajani, who has been living and working in the city since 1960.

The sprawling retrospective of more than 100 works traced Armajani’s six-decade-long career. Considering its scale, as well as Armajani’s ravenous appetite for experimenting with, and blending, different forms and disciplines, the show’s title, “Follow This Line,” could be interpreted as ironic. Far from being linear, the path the retrospective took viewers down was circuitous and at times endless. In this sense, the exhibition could be seen as an Armajani piece in its own right: a macrocosm of disorder within order.

If there was anything that could be followed, it was the artist on his journey from Tehran to the United States. A number of works produced in the 1950s, while Armajani was still in Tehran, stood out on account of their themes, medium and aesthetic. Works on paper such as Book, Taranee and Dictionary of Numbers (both 1957) employ visual elements from medieval Persian manuscripts, as well as talismans. Produced during the same period, Shirt #1 (1958) features calligraphy inscribed on a traditional Iranian tunic belonging to Armajani’s father. Although he would create similar Iran-centric pieces during his first year away from home—most notably Letters Home (1960) and Letter #6 (1961), poignant documentations of exile and longing that he would draw on decades later in the pen-on-mylar scrolls Written Minneapolis (The Last Tomb) (2014) and Written Iran (2015–16)—his new surroundings would drastically alter his artistic career.
The late 1960s was one of Armajani’s most experimental periods. Works like Effaced Dictionary (1968)—in which the definitions are all blacked out—and the stenciled television installation Moon Landing (1969), as well as the vinyl record A Fairly Large Number (1969), are instances of forays into readymade art, and, in the case of the latter, sound recordings. The works that brought Armajani acclaim in the 1970s were his architectural sculptures. “Follow This Line” featured many models for bridges and houses he imagined (and in some cases realized), including more than 150 small maquettes for the “Dictionary for Building” series (1974–75). It’s not so much the models themselves that are interesting, but rather their underlying ideas. His House to Work; Work to House Bridge (1969) is endearing in its idealism in the face of practical impossibility—an effect echoed in later models such as House Under the Bridge (1974).
Above all, the show’s focal point was Armajani’s “Seven Rooms of Hospitality” series (2017), especially in light of the current sociopolitical climate in the US. With its conspicuous reference to poet Nizami Ganjavi’s epic Seven Beauties (in which the Iranian monarch Bahram V visits seven women in seven pavilions), “Seven Rooms” follows up on Armajani’s installation critical of the Iraq War, Fallujah (2004–05), which Armajani initially struggled to exhibit in the US. Just as politically charged, if not more so, the group of works provide palpable commentary on the Trump administration’s immigration policies as well as the global refugee crisis. The 3D-printed food truck Room for Asylum Seekers aside, the six other installations—reflecting the spirit of Russian Constructivism—present audiences with various episodes in the experience of a modernday refugee in the US. There’s a life-size Room for Deportees, complete with barbed wire; austere looking rooms for detainees and migrant workers; a room for refugees; and downright draconianlooking rooms for exiles and the displaced. The inclusion of these critical works elevated “Follow This Line” from being purely a celebration of former triumphs. Where does this line lead? Toward some deserved approbation, surely—but hopefully also toward an earnest discussion about the ills plaguing the US and the world at large. 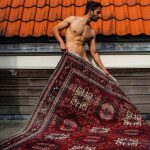 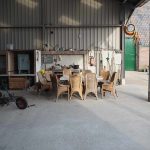